If you are on holiday in Sicily, you can not miss the city of Taormina. This was already written by the german artist Johann Wolfgang von Goethe.

Taormina, one of the most beautiful cities in Sicily

Taormina is a hill town located on the eastern coast of Sicily. A small medieval village suspended between rock and sea, is in fact on top of Mount Tauro and is bathed by a wonderful crystal clear sea. Near Taormina you can find Mount Etna, the only active volcano in Europe full of paths that allow you to reach the top.

Taormina is famous for the Teatro Antico di Taormina, an ancient Greek-Roman theater that every year hosts many events such as concerts and theatrical performances with Taormina Arte, also in June takes place the Taormina FilmFest, one of the most important Italian kermes on cinema, with international guests. The theater has been realized in a panoramic point from which you can admire Mount Etna with its snowy slopes.

The town is enclosed within two doors, Messina gate and Catania gate. As soon as you cross the Messina gate before you will open a beautiful village with its buildings full of architectural elements typical of the Roman and Gothic style.

Walking through its small streets you can discover really suggestive alleys, which will lead you to the church of San Pancrazio, built on a Greek temple, the Palazzo Corvaia and the church of Santa Caterina d'Alessandria. In the heart of Taormina there is an impressive and majestic Duomo, built in stone. Opposite the Duomo, Piazza IX Aprile expands, a marvelous terrace overlooking the sea, full of bars and restaurants. From it’s balcony you can admire a breathtaking view of the baia di Naxos but also the ruins of the theater. In this square is the most important building the tower called torre dell'Orologio from here you enter the medieval district of Taormina.

Taormina is the tourist destination chosen by both the great and the young because it offers art and culture but also lots of fun with its nightclubs and countless bars and restaurants.Those who spend their holidays in Taormina can not help but take a walk along Corso Umberto I, the main street of the city, full of shops that make it ideal for those who love shopping.If you are looking for a little relaxation surrounded by greenery, you can visit the wonderful Villa Comunale di Taormiana, a triumph of flowers and colors.

One of the attractions of this wonderful Sicilian village are its beautiful beaches equipped with umbrellas and sunbeds, among these we find Isola Bella, since 1998 declared a nature reserve. Isola Bella is connected to the mainland by a narrow strip of land that at high tide is submerged making it an island in all respects, while at low tide it can be easily reached on foot. The island is a natural open-air museum, where you can admire numerous tree species, animal species and the picturesque house that has recently been renovated.

A few minutes by car, you will find the beautiful sandy beaches of Giardini Naxos and Mazzarò. If you prefer an excursion far from the sea, you can reach the village of Castelmola. The town is very close to Taormina and is also part of the most beautiful villages in Italy, here you can admire a beautiful view. In this delicious village you can visit the remains of the castle, the Piazza di S. Antonio and the Chiesa Madre di Castelmola.

Finally, to end your days in Taormina, you can dine in one of the many outdoor restaurants, where you can taste some of the typical products cialini as: fish, cheese, sausages, arancini, focaccia, or stop in a bar to taste the cannoli alla ricotta, the granita or la cassata sicialiana. 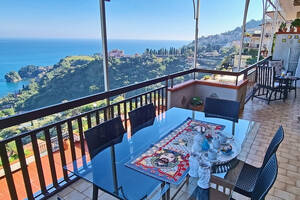 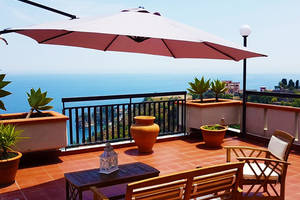 Holiday apartment in Taormina with sea view and large terrace 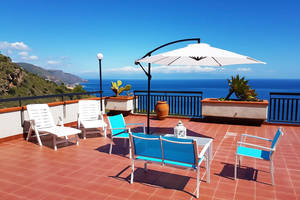 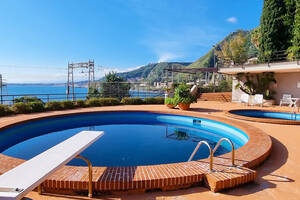 Apartment with pool, sea view and view of Etna volcano 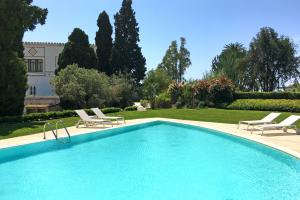 Luxury apartment in Taormina with pool and sea views 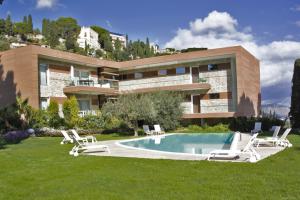 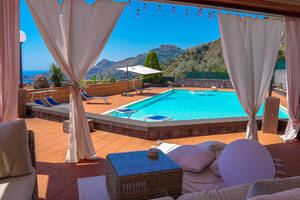 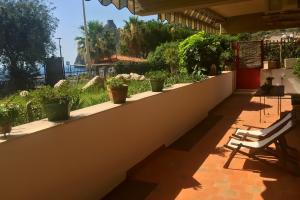 Fantastic holiday apartment right on the sea with large terrace