Luxurious holiday apartment with pool near Taormina overlooking the beautiful Isola Bella, the volcano Etna and the mediterranean sea in Sicily. 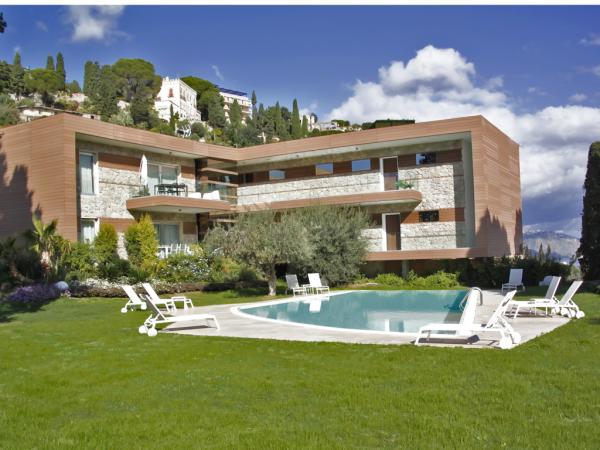 This charming apartment is located on the ground floor of a beautiful building near the center of Taormina. Perfect for those who want to spend holidays in tranquility near the sea and surrounded by greenery without giving up the nightlife. From here you can reach in a few minutes the center of Taormina with its shops, restaurants and bars where you can taste typical Sicilian products.

Taormina is the perfect combination for those on holiday looking for nature but also for art and nightlife, a tourist destination for many famous people.

It has a kitchen equipped with every comfort to make your holiday in Sicily perfect, a bedroom and a bathroom.

The furniture is very sophisticated and refined, with attention to every little detail. The living room overlooks a balcony equipped with table and chairs, here you can relax after a busy day at the sea, sipping something fresh while admiring the fantastic sea view.

Outside we find a large and wonderful green lawn, with swimming pool overlooking the island Bella, and parking space.

Taormina is a hill town of 11,086 inhabitants, located on the eastern coast of Sicily near Messina and near Mount Etna, the most active and highest volcano in Europe, which thanks to its paths allows us to explore it up to the summit.

The city is famous for several attractions, but in particular for the Ancient Theater of Taormina. An ancient Greek-Roman theater that still hosts many events. Built in a fantastic location from which you can admire the impressive Mount Etna.

The coast is rich in cove and has sandy beaches. A small and narrow strip of sand connects Taormina to the Isola Bella, a small and beautiful nature reserve.

Surrounded by small and characteristic villages such as Castelmola and seaside towns such as Giardini Naxos. Nearby you will also find the splendid gorges of the Alcantara where you can make unforgettable excursions among its gorges bathed by very cold water.

Taormina is one of the few places where you will find many cultural and archaeological attractions, a splendid sea, the possibility to make many excursions, but also shopping thanks to its multitude of shops and in the evening conclude your days in the restaurants where you will taste the typical Sicilian products.