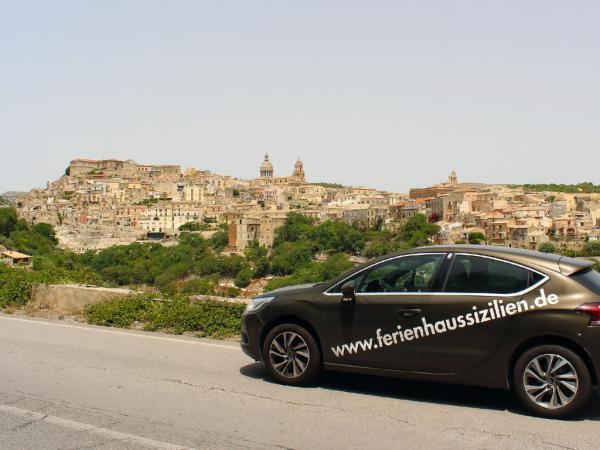 Ragusa - A testimony of an eventful past

The probably most artistically and archaeologically impressive late baroque city in the Val di Noto and at the same time capital of the southernmost province of Italy of the same name is Ragusa, situated at 500m altitude in the mountain landscapes of the Monti Iblei between the deeply cut valleys of the Torrente San Leonardo and the Torrente Santa Domenica.
Ragusa, Noto, Modica, Palazzolo, Caltagirone, Militello in Val di Catania, Scicli and Catania were all declared UNESCO World Heritage Sites in 2002 for their wealth of exemplary urban sites and magnificent Baroque buildings.

Because after the devastating earthquake of 1693 it was not possible to agree on how the city should be rebuilt, Ragusa exists twice: the enchanted Ragusa Ibla (the lower town) at the original location and on another hilltop, beyond a deep green valley, the pulsating chessboard-like upper town of Ragusa Superiore with its wide streets and squares. The two districts are picturesquely connected by three bridges: the Ponte Vecchio, the Ponto Nuovo and the bridge San Vito (or Giovanni XXIII). From here there is a splendid view over the Cava di Santa Domenica gorge, with its almost tropical vegetation.

The ancient Ragusa Ibla is a charming place to visit, with its winding streets and numerous staircases that take you back to the Middle Ages. The majority of the 18 UNESCO sights are located here. The Baroque style, made of local stone with volutes, hollow and massive rooms, columns and capitals, statues and architectural compositions dominate the cityscape and the narrow streets leading up and down form a labyrinth of passages paved with stone. Here you can experience the true magic of Sicily, its soul!

The sights of Ragusa

The best starting point for a walk is the busy Corso Italia in the upper town from Piazza San Giovanni. Here the Cathedral S. Giovanni Battista impresses with its impressive bell tower, its high columns and various decorations. A short detour into Via Roma allows a view of Palazzo Vescovile Schininà. Continuing towards Ragusa Ibla, three masks above the windows of Palazzo Bertini cast a glance at the passers-by: a toothless, hungry old man, a fine nobleman and a rich merchant with a turban - symbols of poverty, power and wealth. Via S.Vito leads to the fourth and last UNESCO monument of the Upper Town, Palazzo Zacco. Today the local museum is housed here with insights into the handicraft tradition of the region.
At the end of Corso Italia, which leads into Via XXIV Maggio, there is Scala - a 242-step staircase with magnificent views of the lower town. The facade of Palazzo Cosentini is decorated with mythical creatures and the balcony consoles of Palazzo Rocca are decorated with the architect's contemporaries, some of them grotesque.
At the end of the cathedral square, flanked by a wide open staircase, is the probably most impressive showpiece of the Sicilian Baroque, the masterpiece of the Sicilian architect Gagliardi: the Dome San Giorgio with its elegantly curved facade. Another work of the architect is the Cathedral of S. Giovanni.

The walk ends at the Giardino Ibleo, a charming garden with a fascinating view of the valley below with its river Fiume Irminio and the limestone gorges. In the park there is also access to the church of Chiesa dei Cappuccini with a 17th century winged altar. At the end of the garden are the last remains of the predecessor of S. Giorgio Cathedral, completely destroyed by the earthquake of 1693.

Outside the city centre you can park for free in the parking lot Parcheggio Gratuito "San Paolo" in Via S. Paolo.

Parking spaces are subject to charges:

We recommend a visit to Donnafugata Castle, 23 km southwest of Ragusa. The Gothic-Venetian-inspired facade of the extensive castle, crowned by battlements, rises out of the flat landscape like a stone mirage. The approximately 30 rooms with floors of black pitchstone still have a touch of noble living culture. The excellent scooters invite you to take a culinary break.

However, those who want to indulge in relaxation with bathing pleasures will stop at one of the many golden sandy beaches. The most visited seaside resort is Marina di Ragusa with all its amenities. Nature lovers will find the beach of the Riserva di Randello Nature Reserve to their liking.