Palermo, on the northern coast of Sicily, is the fifth-largest city in Italy. If you want to experience life in Sicily, you can't miss Palermo. 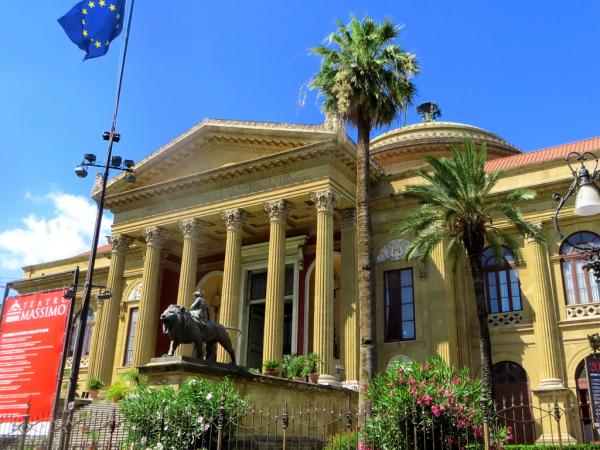 Palermo, the capital of Sicily, is located in the northeast of the Mediterranean island in a long bay on the Tyrrhenian Sea. The city is flanked by the approximately 600 meters high Monte Pellegrino. The cityscape is characterized by magnificent piazzas, cathedrals, and museums with Byzantine, Arabic, Norman and Spanish influences.

The most famous sight in Palermo is the Norman Palace with the famous palace church Palatina. No less impressive are the Cathedral Maria Santissima Assunta, the Teatro Politeama, the Norman church building San Giovanni degli Eremiti, the historic Piazza Quattro Canti or the many other piazzas with partly colorful market hustle and bustle. Right in the center of Palermo is the notorious Teatro Massimo opera house, which was also the setting for the final scene of Francis Ford Coppola's film "The Godfather - Part III".

Worthwhile excursions are also offered in the charming surroundings of the city, such as Mondello, the fashionable beach resort of Palermo. The nature reserve of Monte Pellegrino with its more than 100 grottos is also a destination worth seeing. The mountain is considered a paleontological open-air museum with fossilized fossils, the most interesting finds of which can be admired in the Regional Archaeological Museum in Palermo (Ital. Museo Archeologico Regionale Antonino Salinas).

As they always say, many roads lead to … Palermo.

You can drive to Palermo by car, if you take the European road 90 or the highway A19 from Catania and from Messina the highway A20. Or you can use the ferry to Palermo to the port of Palermo.

The easiest way to get to Palermo is by train. It is best to go to the main station, Palermo Centrale, which is located right in the center of Palermo.

For more information about local transport in Palermo and the different lines of streetcars and buses, click here: https://www.amat.pa.it/.