The capital of the province of the same name fascinates not only with its ancient old town, but is also a testimony of wealth and trade 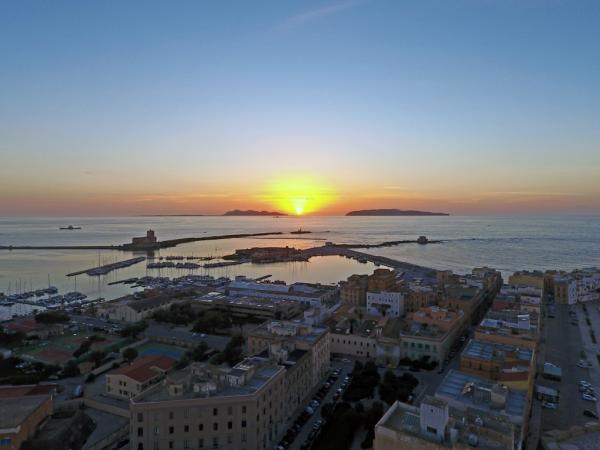 In western Sicily, the port city of Trapani lies on a rural crescent. The city owes its name to this shape, because in ancient times the Greeks called this spot Drepanon, which means sickle. The two points of the land rise into the sea and so it is explained that Trapani is also called the city of the two seas. Once Trapani was one of the richest cities of the Mediterranean - a wealth built on salt. The white gold from the salt pans in front of the city has been and will continue to be cultivated, and today it still combines with the landscape in a fascinating way and turn blue or pink depending on the incidence of light. But tuna fishing and coral processing also made the city a central place for sea trade until the Second World War.

The western tip of the crescent is dominated by one of the city's most impressive monuments, the Torre di Ligny from the 17th century, which was supposed to protect against pirates due to its strategic position. It has now been restored and is used for peaceful purposes. Today it is the seat of the Prehistoric Museum (Museo di Preistoria e del Mare). On an island in front of the port, the landmark of the city, the Castello della Colombaia, offers an imposing sight, originally built as a fortress and later used as a prison and lighthouse.

In the pedestrian-friendly old town of Trapani, splendid baroque palazzi and churches along Via Garibaldi and Corso Vittorio Emanuele bear witness to Trapani's heyday among the Aragonese. It is worth visiting the Church of Chiesa des Purgatorio, which houses the city's greatest treasure, the 20-ton wooden figurine dolls of the Passion of Christ, which have been carried through the streets for one night during the Good Friday procession since the late 18th century.
Those interested in art should not miss a visit to the Museo Agostino Pepoli (National Museum of Agostino Pepoli), which, along with its Pinacoteca and other numerous manufactories, houses a real treasure trove of coral. Next door is the Basilica of Maria Santissima Annunziata, called the Madonna of Trapani, built between 1315 and 1332, famous for the marble statue of the Madonna of Trapani. Other interesting sights are the Cathedral of San Lorenzo, the Collegio dei Gesuiti, the Chiesa di Sant'Agostino, the Chiesa di San Francesco d'Assisi and the Mercato del Pesce. If you are looking for a little relaxation from sightseeing, Villa Margherita, the city park of Trapani, is the ideal place for you. It was founded at the end of the 19th century and allows holidaymakers to admire the Mediterranean flora. With a playground and various events, the complex offers fun for young and old.

The Egadi Islands
A day trip to the Egadi Islands off the coast of Trapani is worthwhile when you are on holiday in Trapani. Vacationers can reach the islands easily by ferry and then enjoy the fine sand on the beaches, the crystal clear waters and the unique sea panorama. Thanks to the great variety of species, the islands are also an experience for prospective and experienced divers.

Erice
A trip to the medieval pearl of the province, 750m above sea level on Monte Erice, which can be easily reached by cable car from Trapani, is highly recommended.

Nature & Beach
Behind San Vito Lo Capo lies the nature reserve Lo Zingaro with its six kilometres of wild coastline and the most beautiful beaches of Sicily. To the west of Trapani rises Mount Cofano with its impressive pyramid shape. It is also protected by nature and has beautiful pebble beaches.