A medieval town centre with its historic buildings, a magnificent view and traditional delicious almond biscuits attract visitors to Erice. 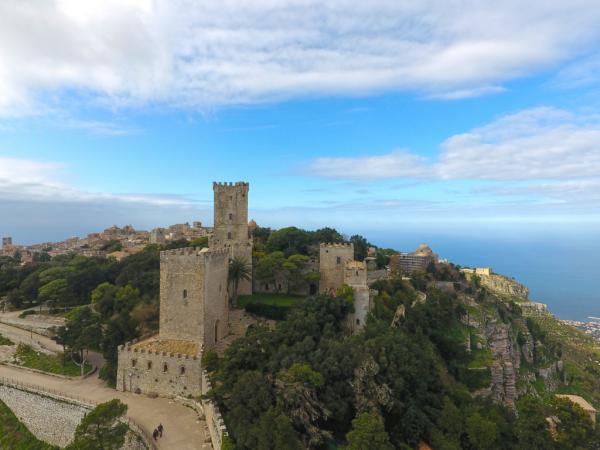 The Sanctuary of Venus on Top of Monte Erice

In the west of Sicily, in the province of Trapani, Erice towers like an eagle's nest on an imposing mountain peak, Monte Erice (751 m), protected by cyclopean city walls. A romantic small town that for thousands of years has witnessed the eventful history of Sicily, and sometimes even suffered it. Punics, Romans, Arabs, Normans - everyone was there.

The outline of the city is like a triangle, which is probably related to the cult of Aphrodite in antiquity, where the triangle was an important symbol. The city wall still borders the city today, and the houses seem to cling to the rock.

Entering Erice through one of the well-preserved Norman gates, Porta Spada, Porta Trapani or Porta Carmine, narrow streets paved with pebbles lead gracefully through the town centre. Flowery courtyards and numerous churches frame the squares, and the dreamy garden of the Baglio in particular invites you to relax and linger. Immediately behind Porta Trapani stands Chiesa Matrice, probably the most significant building in the city, with its Gothic portal and bell tower, the Campanile, stretching out towards the sky. The climb up to the top of the tower is worthwhile because from here you can enjoy a breathtaking panoramic view over the salt flats to the town of Trapani and the Aegades, the offshore archipelago of western Sicily, and San Vito Lo Capo, one of the most beautiful beaches in Sicily.

Among the most visited sights are the two castles, Castello Pépoli and Castello di Venere on the other side of the city. The first was built by the Arabs, whereas the latter is a Norman building with impressive towers, whose name derives from the fact that it is on the site of the ancient temple of Venus, supposedly founded by Aeneas.

Other places of interest are the Chiesa San Giovanni Battista, the Chiesa del Carmine and the Museo Comunale, which exhibits objects from the Neolithic, Punic, Greek and Roman periods. In the north-east of Erice there is a fortress built by the Phoenicians, parts of which have been preserved. The view from Piazza S. Giovanni up to the castle on the east side of the city is also fantastic.

Erice is important not only historically, but also scientifically. Since 1963 it has been the seat of the Ettore Majorana Cultural Centre, which attracts the most essential scientists from all over the world: Doctors of medicine, jurists, historians, astronomers, philologists, chemists - hence the nickname "City of Science".

The special festival
in mid-August offers Erice a special music festival of medieval and Renaissance music with instruments you rarely hear, especially not in such an authentic context of ancient borgo and Sicilian summer air! Musicians from all over the world meet under the sign of ancient music.

By cable car to Monte Erice
A very popular and at the same time beautiful way to get there by car is from Trapani; take the Funivia Trapani-Erice. This cable car overcomes the 3000 meters in about 10 minutes and takes you up to the top of the mountain with ease - so you can already enjoy a relaxed and impressive view of the interior of the country during the ride. It is a good idea to visit Erice in the early hours of the morning, when the city is not yet full of tourist bustle.  There is also the best chance of a clear view, because the city loves to wrap its face in fog and clouds at a later hour. 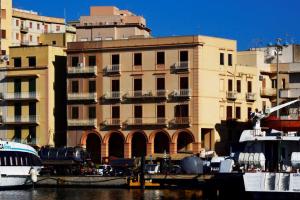 Bed & Breakfast located in the centre of Trapani 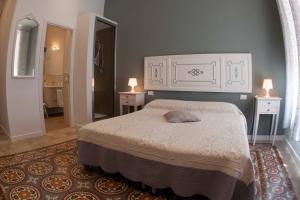