The romantic fishing village Marzamemi in the Pachino area (region of Siracusa) is known for its tuna specialties and its charming atmosphere. 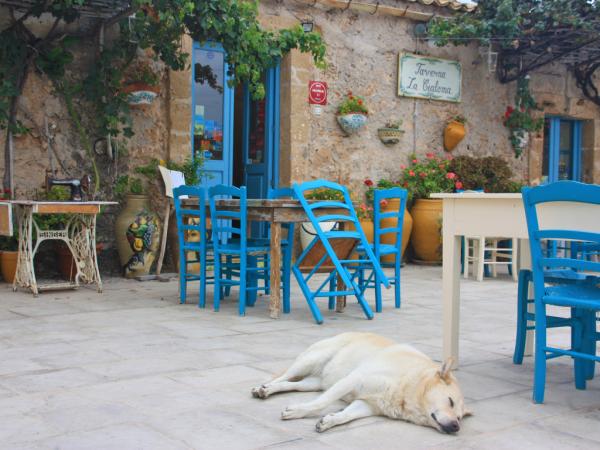 Get enchanted by the charming village Marzamemi

Those who travel the southeast coast of Sicily should not miss Marzamemi. The idyllic village owes its name to the Arabs who discovered this jewel in the 10th century and called it Marsà al-hamam, which translates as the turtle doves bay. Also the tuna factory "Tonnara di Marzamemi", today no longer used as such, is witness of the Arab foreign rule. Fishing and tuna fishing have left their mark on Marzamemi and the old fishing houses now accommodate restaurants, cocktail bars, pizzerias, pubs and dance halls. In the centre, the old and new churches of San Francesco di Paolo and Palazzo Villadorata are well worth a visit. But what makes the place so special is the play of colours. Sandstone coloured facades, sky blue doors, geraniums and petunias in all shades of pink and red and in front of it the turquoise blue sea do not only delight romantics. It even served as a backdrop for Klaus Maria Brandauer's 1994 film adaptation of Thomas Mann's novella "Mario und der Zauberer".

Marzamemi is worth a visit at any time of the year, but its ambience is particularly captivating in the summer months, when live music is heard on warm evenings in the picturesque Piazza Regina Margherita and fish restaurants such as La Cialoma offer seafood delicacies.

Enjoy the sunset in Marzamemi after a visit to the Vendicari Nature Reserve or a stay on the nearby sandy beach of Porto Palo di Capo Passero.