The Aeolian Islands comprise seven islands in the north of Sicily

The Aeolian Islands are of volcanic origin, located north of Sicily in the Tyrrhenian Sea and with their islands Alicudi, Filicudi, Lipari, Panarea, Salina, Stromboli and Vulcano they are a fantastic destination away from mass tourism. One of the reasons for this is that they can only be reached by sea. Ferries and speedboats run several times a day between Milazzo and Lipari, the central transfer port for all islands. The islands can also be reached from Messina, Cefalù, Palermo and Naples.

What makes these islands so attractive to nature lovers and bathers is their wild and untouched nature: crystal clear sea, open-air thermal springs and landscapes that are different on each island due to their geological characteristics. The brilliant white of the pumice stone, the green of the macchia bushes and tufts of grass, the earthy to red tones of the soil and last but not least the deep black of the lava provide a spectacular play of colours. The coasts almost always consist of steep shores breaking off into the sea. Caves, grottos and rock arches, small cliffs and tiny bays form a previously undestroyed landscape. Because of this uniqueness, UNESCO declared the Aeolian Islands a World Heritage Site in 2000. 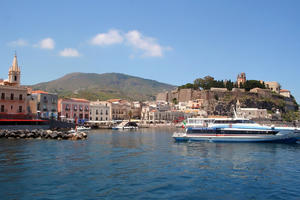 Lipari is the largest and also the most visited of the Aeolian Islands north of Sicily. Here ferries dock to reach all the islands. 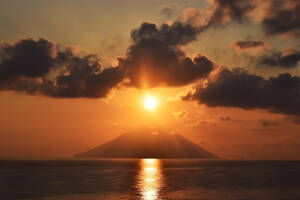 The island of Stromboli, with an active volcano, is probably the most famous of the Aeolian Islands and a popular destination among tourists. 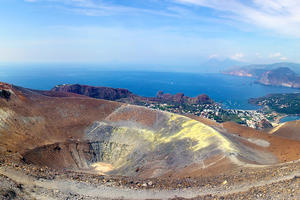 Vulcano is one of the Aeolian Islands in the Tyrrhenian Sea off the northern coast of Sicily with an active volcano and a popular mud bath. 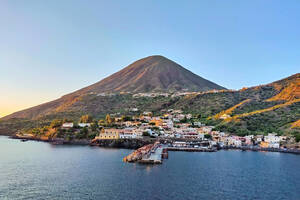 Salina, the second largest of the Aeolian Islands in the Tyrrhenian Sea, is known for its Malvasia wine, its delicious capers and its tranquility.