Salina, the second-largest island of the Aeolian Islands, is known for its Malvasia wine, tranquility, relaxation and, above all, delicious capers. 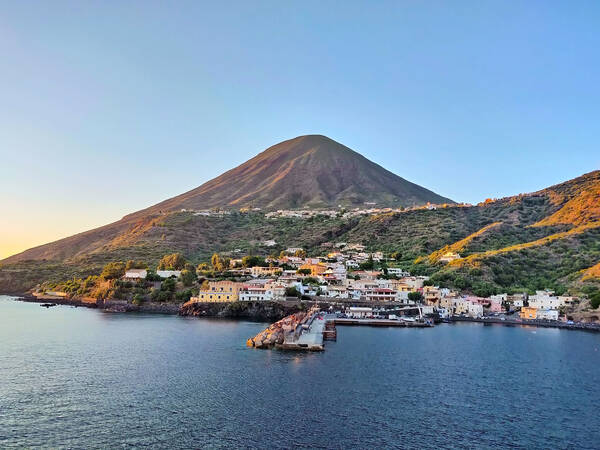 The island of Salina, known for malvasia and capers

Salina is the second-largest island in the Aeolian Islands and, thanks to a spring of fresh water, is also the one with the greenest and most cultivated soils.  Salina is also known as the island of "Malvasia delle Lipari" - a highly prized wine with a sweet flavor and golden color whose grapes are grown on the slopes of the island, it is drunk accompanied by so-called "piparelli."

Salina is also famous for its tasty capers and cucunci, which thrive here.

The island is characterized by the volcanoes Monte Fossa delle Felci with its beautiful fern forest and Monte dei Porri from whose peaks there is a splendid view of the entire archipelago. Hikers will find a clearly recognizable path that starts from the port of Santa Marina Salina and zigzags to the old and now inactive volcano summit, at an elevation of 962. From here you will be able to admire a fantastic view of the entire archipelago, and then take the descent to Leni and Rinella.

One of the places not to be missed in Salina is the spectacular Pollana coastline.  Here in 1994, Michael Radford shot the award-winning film "Il postino" starring Philippe Noiret as Pablo Neruda and Massimo Troisi. Pollara is a small fishing village consisting of a few houses carved out of rock caves on the small beach. From here it is possible to admire a breathtaking sunset, considered among the most beautiful in the world. You can swim on the pebble beaches to the east, the rest of the island offers almost exclusively rocky and steep coastlines, accessible only in a few places (Punta di Scario near Malfa, Pollara and Rinella).

Salina is also home to the archipelago's oldest Marian shrine: the Sanctuary of Madonna del Terzito, built over an ancient temple. On feast days there are processions that are a true folkloric spectacle.

Salina is beautiful to see all year round, but if you are interested in seeing the caper harvest we invite you to visit in June, this is the time when you can pick capers together with the locals.