The holiday apartment is on the ground floor of Villa Le Mimosa and has a beautiful garden with terrace, just 50 m from the sandy beach of Sicily. 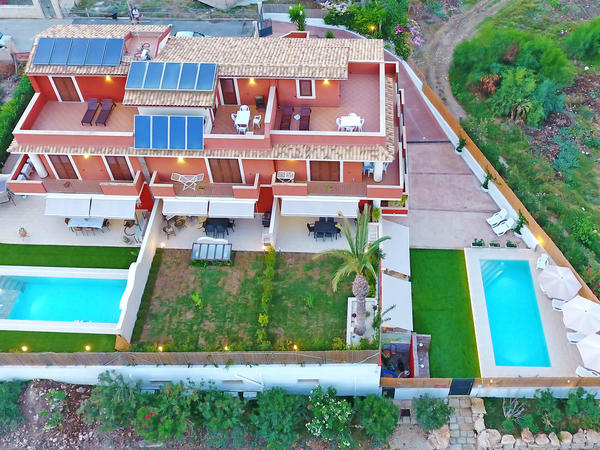 Caracol - holiday apartment near the beach of Pozzallo with garden

The holiday apartment is located just 50 meters from the sandy beach in Sicily. The beach of Pozzallo is honored each year with the Bandiera Blu award for especially beautiful and clean beaches with high water quality.

On the terrace with garden you can enjoy the sun, grilling together or just relaxing. The kitchen is fully equipped and the cozy sitting area in the living room offers TV and wireless Internet.

The holiday apartment in Pozzallo can accommodate up to 6 people Both bedrooms have air conditioning and offer a double bed and 2 single beds. In the living room there is additionally a sofa bed.

Those looking for holidays in Sicily by the sea, this is the place. The fine sandy beach and the crystal clear waters are a good basis for a perfect family holiday in Sicily.

Pozzallo is located in the province of Ragusa in southern Sicily directly on the coast of the mediterranean sea.

Pozzallo offers the best of seaside holiday, evening entertainment and cultural diversity. Ragusa - here the series "Commissario Montalbano" was filmed, Modica - known for its churches and for its original and delicious chocolate, Noto - with its towering cathedral, Siracusa - with the enchanting peninsula and old town Ortigia are only some attractions in the area. From the port of Pozzallo you have daily connections to the island of Malta. A visit to Valletta, the wonderful capital of Malta, is easily possible in a day trip.

Pozzallo is the only municipality of the province of Ragusa, which is by the sea. The inhabitants live from agriculture (carob) and fisheries. The neighboring municipalities are Ispica and Modica. The station of Pozzallo on the railway line Siracusa-Licata is the most southern station with passenger transport in Europe. The travel time is about 1 hour to Ragusa and about 1 hour and 10 minutes to Syracuse.

The rent refers to 2 persons per week. Each additional person is 70 € per week on top.

Wireless Internet can be bought for 15 € per week and bicycles for 8 € per day.